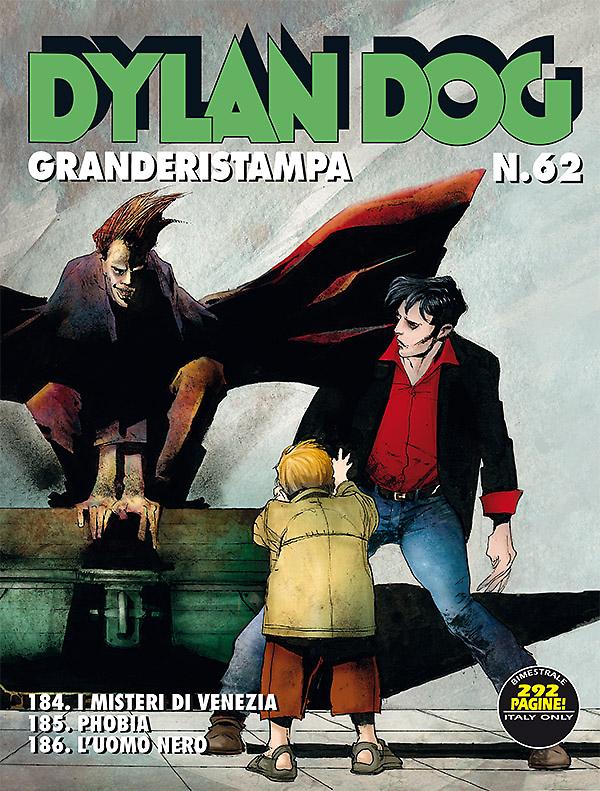 Venice seems to be custom-made for dreaming, but there’s someone who wants to transform dreams into nightmares... nightmares that are so monstrous they could sink the ancient queen of the lagoon into the abyss for ever. Luckily, there’s no lack of folks around who are keeping a watch over her destiny: Saul, the fallen angel, a former Scotland Yard agent called Dylan Dog, Police Inspector Corradi and the lord of all Ladies’ Chambers, the buccaneer who broke out from the Piombi prison, Giacomo Casanova!

“Fear can kill you” is not just a turn of the phrase. Not for Dr. Ashenbach’s patients, at least! It happens, when the subject you treat are susceptible to the most conditioning forms of pathological phobia, especially if someone exploits their weakness to eliminate them. The only hope for this scanty patrol of miscellaneous phobics is a certain apartment at 7, Craven Road. That’s where Dylan Dog lives, a man who, instead, lives off fears...

Who’s afraid of the Uomo Nero [Man in Black] ? What a question! There isn’t a single kid in the whole world who hasn’t been frightened to death by the Uomo Nero, at least once. And then as you grow up and you discover that the real horrors of life are quite a different kettle of fish... Now this is what happens to Timothy Madison, surrounded by indifference and by an icy affluence, a kid who, thanks to Dylan Dog and his one and only friend, Sheila the baby-sitter, has learned to speak to his fears, drawing on them for the strength he needs to face the hard job of living!